Leonardo, the Dinosaur Mummy
The Most Complete Dinosaur Fossil Ever Discovered

In 2000, Dr. Dan Stephenson, an amateur fossil hunter who was exploring a small canyon on a cattle ranch in the badlands of Montana, made an amazing discovery.  He found the most complete fossil of a mummified dinosaur ever unearthed.

In 2002, the first scientific team, led by paleontologist Dave Trexler, began what would become a six year research project to study this most unique of dinosaur fossils.  By the end of the research project in 2008, nearly 100 scientists and technicians participated in unlocking the secrets of the mummy dinosaur.  The team included famous paleontologists such as Dr. Bob Bakker and Dr. Karen Chin.  Importantly, the team also included many scientists from other fields of study, such as Dr. Arthur Aufderheide, who is regarded as the foremost expert on mummies (the human kind) in the world.

What was learned about the mummy dinosaur known as Leonardo can fill several books.  One area of prehistory that the fossil helped us understand better is what his world was like when he was alive.  That is the story that the book, "The Last Day of the Dinosaur Mummy" tells (look for the book in the Dinosaur Earth website store.)  The amazing and incredibly lifelike illustrations in this book were created by artist Dr. Julius Csotonyi.  He is not just an artist, Julius is also a scientist, and his vast knowledge of science and prehistory gives him the ability to create amazingly accurate illustrations.  For the mummy dinosaur project, he created what many consider one of the greatest murals of dinosaurs ever made – at 128 feet long and 8 feet tall, it is a masterpiece of art and science. 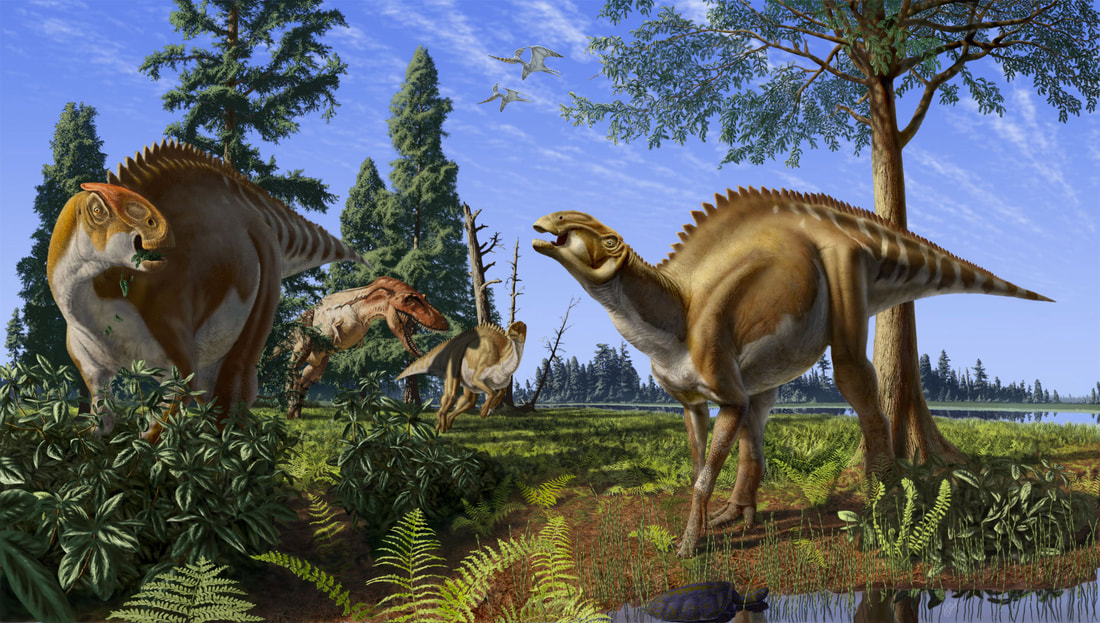 Leonardo, background, being attacked by Daspletosaurus. Illustration by Julius Csotonyi
Leonardo was a Brachylophosaurus canadensis, one of the earlier members of the family of dinosaurs known as hadrosaurs.  Many people call these types of dinosaurs “duckbills” because they had a beak at the front of their mouths to help them tear leaves from tough plants.  Unlike ducks, they also had hundreds of teeth in their mouth to help them grind the tough leaves into a pasty pulp before they swallowed their food.  One of the things that the mummy dinosaur showed scientists was his very thick neck, something that had never been preserved in a fossil before this discovery.  Dr. Bob Bakker saw this fat neck and the first thing he thought was that it was like the crop on a bird.  A crop is a sort of pouch where the chewed food would have been stored while digestion started.  Some scientists had suspected this might exist in dinosaurs, but the mummy dinosaur seemed to prove this idea.

Life would not have been easy for the plant-eating dinosaurs.  One of the X-rays of Leonardo clearly shows a wound on his side, a bite from a predator.  In the picture above, a Daspletosaurus, another early member of the tyrannosaur family, has leaped from hiding in the trees to attack the small group of Brachylophosaurus.   It is likely that an attack just like the one shown in the picture is what wounded Leonardo shortly before he died.

Leonardo was a sub-adult, probably six years old when he died.  That means he had all the features of a fully grown Brachylophosaurus, but that he was not yet full-sized.  The mummy dinosaur was about 23 feet (7 meters) long when he died.  A full grown adult male Brachylophosaurus could grow as long as 35 feet (11 meters) long.  Scientists think they reached their full size around the age of 12.  These dinosaurs would have grown quickly their first few years of life, something that helped them survive the many different predators in their world.  A fossil of what is thought to be a three year old Brachylophosaurus that was discovered close to the mummy dinosaur showed a dinosaur that was 16 feet long.  Because this smaller dinosaur had features that were not yet those of a more mature animal, it is called a juvenile.

The last day in the life of Leonardo would have begun like most of those during the six years he was alive.  Duckbills were herd animals and would have lived in groups that could number over 100 individuals.  Leonardo would have probably slept with his herd in the conifer forest.  This gave them some protection from predators as it would have been more difficult to approach the sleeping dinosaurs without being heard.

The fossilized remains of plants that were found in the Leonardo’s stomach and digestive tract have allowed scientists to say exactly what kinds of plants and trees made up the environment where he lived.  Conifers, a kind of pine tree, were similar to those that we have today.  Like the pine trees we see today, these trees had “needles” instead of flat leaves.  These chewed up needles were found in the mummy dinosaur’s stomach contents.  Other trees included cycads and ginkgos.  These trees had flat and very tough leaves. 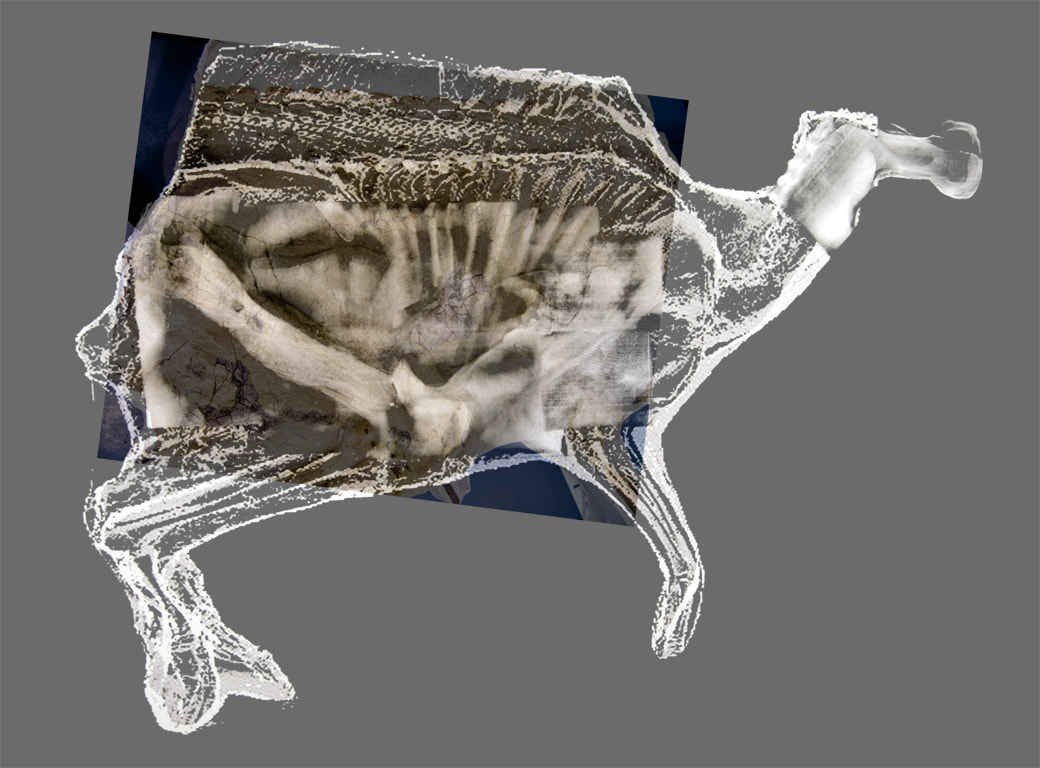 The scientists studying Leonardo faced many challenges that they had never had to face before. Because this fossil was the nearly complete body of a dinosaur, they didn’t know how to approach the research. Did you “cut it up” as one scientist suggested? Doing that might destroy parts of the fossil for future research. The solution was to use hi-tech research and try to create images of what was inside the fossil using powerful radiation sources. Led by team member Art Anderson, teams from Kodak and Carestream Health, the fossil was moved to NASA’s Johnson Space Center in Houston. There, over the course of two weeks, more than twenty scientists, along with NASA specialists and a few astronauts, got their first good look inside a mummified dinosaur. The picture above is a composite of some of these remarkable images.

​
Below, Dr. James Kirkland discusses how special the Leonardo specimen is to science.  At right is a 3D model created from the images of Leonardo that were made by the science team.